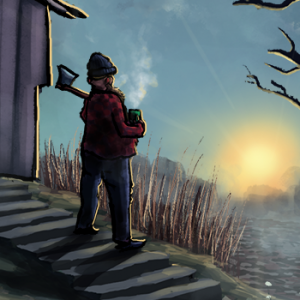 My very first real game. Created at Stockholm University as an exercise to learn about Unity. A simple mobile clicker game about waking up lumberjacks. Like in any clicker game, players can simply tap sleeping lumberjacks to wake them. Lumberjacks get more and more difficult to wake however, and the player can upgrade their tools in various ways, including getting a coffee pot, a gramophone, and promising the workers vacations that they will never get. Rooms also randomly contain elements that can be used to aid the player in waking lumberjacks. This includes curtains that can be pulled up to let in sunlight, and wasp nests that can be dragged into worker’s beds.

For this project I was main programmer and UI designer. I was a new programmer as well as game designer, and everything was new to me. I learned a lot about code, naturally, as well as how to create UI in Unity. I also did a lot of the general game design such as upgrades as well as both functionality and design of them in-room elements.